Good day to all of the Duthcode hackers out there, both the experienced and the knowledge-hungry! I had some free time in my hands and decided to write a story for all of you to read! I call it :

WHY WEP IS NO LONGER WITH US

In this small write-up, I will try to clarify why we don't use the Wired Equivalent Privacy (WEP) anymore to secure our networks! But! Since I know you are a person of action like me, I will be including a short tutorial, in the end, showing you how to crack any WEP password protected network easily with 2 methods called Fake Authentication Attack & ARP Request Replay Attack.

But first the Story...

The early years of WEP

WEP or Wired Equivalent Privacy network protocol was introduced in the vicinity of the new millennium and was supposed to secure the previously open Wi-Fi and other 802.11 networks. It was designed to give wireless networks the equivalent level of privacy protection as a comparable wired network. But it failed miserably.

The WEP encryption uses the RC4 (Rivest Cipher 4) key scheduling algorithm. It implements a data encryption scheme that uses a combination of user and system generated values.
When deployed over a wireless network it encrypts the client's data using a key, it then sends the encrypted packet in the air and to the router where the packet gets decrypted using the same key. 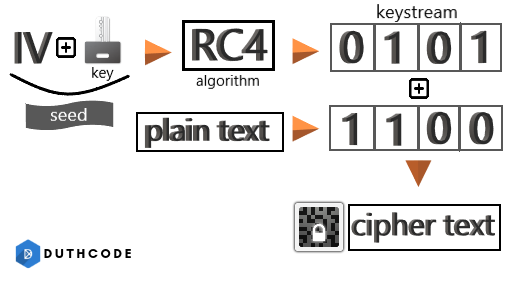 A quick note, The algorithm, and the way RC4 works is quite fine actually. The problem is how WEP implements the algorithm.

The protocol, as I mentioned above, was officially brought to the light in 1999. Two years later, mathematicians showed that it was severely flawed, but the attackers would need around 4 million packets of data in order to calculate the original key. Since then, several flaws found in the algorithm, and the cracking time was reduced down to minutes.

I, once, read on an article that was written back in 2007 that it took a 1.7GHz Pentium-M computer 2 minutes to crack a 104-bit WEP secure key, and it had a 95% success rate. My current machine has an Intel Core i7-7700HQ CPU @ 2.80GHz and the largest WEP secure key available is 256-bit. I believe that you have already begun to imagine why WEP failed as an encryption protocol. [source]

The WEP encryption can be easily broken down in 4 bullets detailing its key elements:

What is the problem exactly?

Ok yeah, we got the point, WEP is shit. But, why? The main reasons are :

The main result of these points above is that

By putting all the aforementioned bullets into perspective, with the help of aircrack-ng, we can exploit the core vulnerability of WEP, crack its encryption, and determine the password accurately.

In my very humble opinion, a hacker needs to have the knowledge of cracking even the most outdated vulnerability. Also, do you think it would be wise to call yourself a hacker without knowing how to crack WEP?

Personal Experience: I remember I started wireless hacking back in 2012. Back then there was this Mobile Network Operator in Greece who would only install Routers with WEP as the default network privacy protocol, so I, the new wireless hacker apprentice had a reason to learn how to crack WEP. As the years went by,  even they changed to WPA2. So I never needed the WEP cracking methodology again.
That was until two months ago! DUN DUN DUUUUUN! No seriously! My father caught the Drone fever, and decided that it would be a good idea to spend his money on a new 500$ Xiaomi Drone! Well, guys and gals, you guessed it! The drone's mobile application was communicating with the smartphone via WEP! :)
There are always outdated vulnerabilities out there! Prepare for the worst but god forbid if you are not prepared for the easy stuff!
[END OF P.E]

Continuing:
As I have mentioned above, if you want to crack a WEP encryption you need a busy network because you also need a large number of IVs. But what happens if the network you are trying to attack is idle?
You could always do what a skilled Hacker has to do on most of the occasions, wait patiently.

But!!! We only wait if it is the last thing left for us to do!

We need this authentication approach because APs only communicate with connected clients and if we are not somehow associated with it we can not even start the main attack.

Associating with the AP before launching the attack

Please do not confuse this method. We are not connecting with the target AP, we just want to let it know that we want to communicate with it so it wouldn't block our requests. So let's associate with our target network.

And then search for targets:

In this result, we see that our target is duthcode_AP

And once you acquire the targets BSSID as we did then you run the following command and leave it running:

This is a very simple command that I have used before in my previous tutorials it goes like this:

Notice that under the AUTH the field is empty and also no STATION is found!

Step 2nd | Associate with the Network

To achieve this Fake Association we will use the tool aireplay-ng.

When we press enter and execute this command we should see, under the AUTH field that previously was empty, OPN and we should also have a new client associated with the network that has the same MAC Address as our wireless adapter.

Now we need to communicate with the network in a way to force it into generating new packets with new IVs which will help us crack the key very quickly!

ARP is address resolution protocol: A TCP/IP protocol used to convert an IP address into a physical address, such as an Ethernet address. A host wishing to obtain a physical address broadcasts an ARP request onto the TCP/IP network. The host on the network that has the address in the request then replies with its physical hardware address.

Very similar command as the one we ran before! Just instead of --fakeauth 0 -a we wrote --arpreplay -b. Once you run the command wait for an ARP packet to be sent in the air. Once you see the ARP number increasing very fast you can run the last cracking command.

And that's it! Just wait for a few minutes and the key will appear!

Because WEP is THAT MUCH VULNERABLE!

That was it! Thank you for reading! If you liked that article here are some other articles that you will most definetely love: